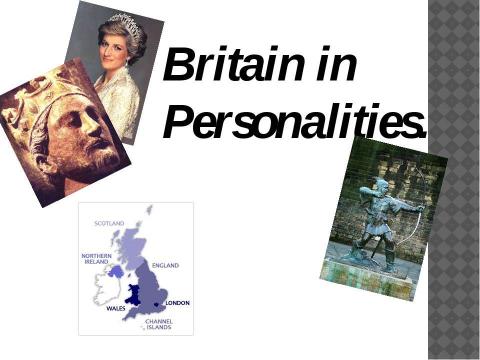 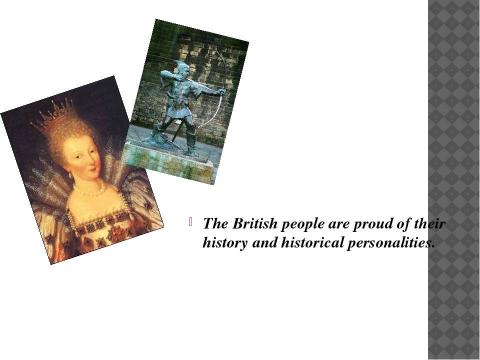 Текст слайда: The British people are proud of their history and historical personalities. 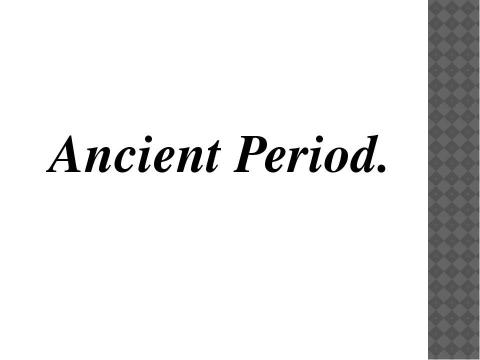 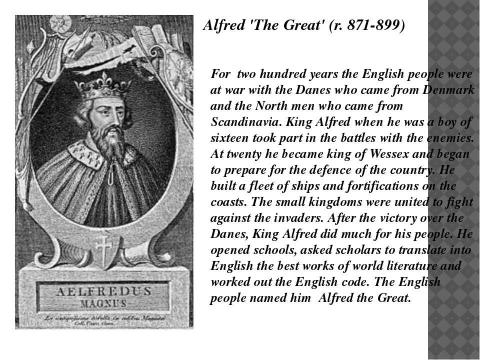 Текст слайда: For two hundred years the English people were at war with the Danes who came from Denmark and the North men who came from Scandinavia$. King Alfred when he was a boy of sixteen took part in the battles with the enemies. At twenty he became king of Wessex and began to prepare for the defence of the country. He built a fleet of ships and fortifications on the coasts. The small kingdoms were united to fight against the invaders. After the victory over the Danes, King Alfred did much for his people. He opened schools, asked scholars to t$ranslate into English the best works of world literature and worked out the English code. The English people named him Alfred the Great. Alfred ‘The Great’ (r. 871-899)

Текст слайда: King Arthur was the son of Pendragon, and was born in Tintagel in Cornwall; He was brought up by Merlin, an old Celtic magician, and became king of Britain when he was fifteen. He proved his right to be king when he managed to pull a sword from a rock. H$e had to fight many lords, and when, with Merlin’s help, he defeated them, he received the magic sword Excalibur from the Lady of the Lake. He married Guinevere and lived in a castle at Camelot. His knights sat at a round table so that they were all equal – nobody was sitting at the head of the table. King Arthur 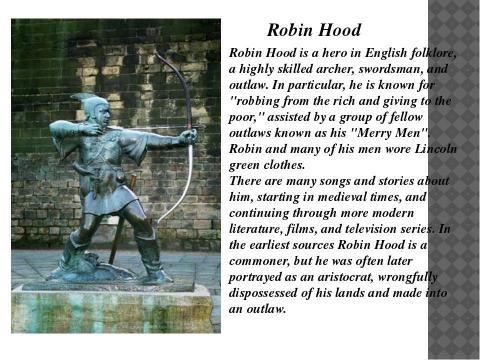 Текст слайда: Robin Hood is a hero in English folklore, a highly skilled archer, swordsman, and outlaw. In particular, he is known for “robbing from the rich and giving to the poor,” assisted by a group of fellow outlaws known as his “Merry Men”. Robin and$ many of his men wore Lincoln green clothes. There are many songs and stories about him, starting in medieval times, and continuing through more modern literature, films, and television series. In the earliest sources Robin Hood is a commoner, but he was often later portrayed as an aristocrat, wrongfully dispossessed of his lands and made into an outlaw. Robin Hood 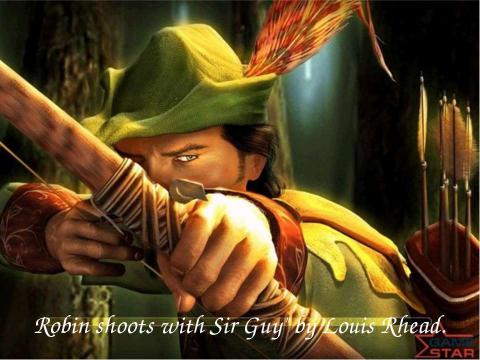 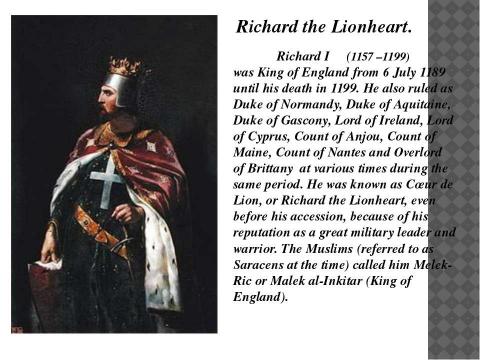 Текст слайда: Richard I (1157 –1199) was King of England from 6 July 1189 until his death in 1199. He also ruled as Duke of Normandy, Duke of Aquitaine, Duke of Gascony, Lord of Ireland, Lord of Cyprus, Count of Anjou, Count of Maine, Count of Na$ntes and Overlord of Brittany at various times during the same period. He was known as Cœur de Lion, or Richard the Lionheart, even before his accession, because of his reputation as a great military leader and warrior. The Muslims (referred to as Saracens at the time) called him Melek-Ric or Malek al-Inkitar (King of England). Richard the Lionheart. 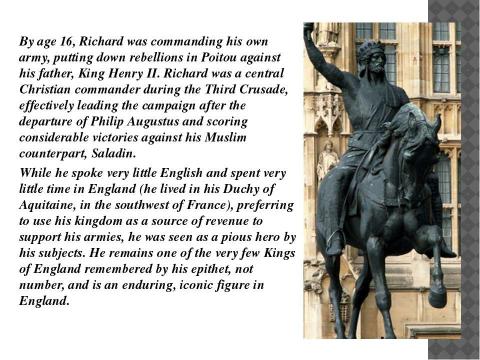 Текст слайда: By age 16, Richard was commanding his own army, putting down rebellions in Poitou against his father, King Henry II. Richard was a central Christian commander during the Third Crusade, effectively leading the campaign after the departure of Philip Augustus and scoring considerable victories against his Muslim cou$nterpart, Saladin. While he spoke very little English and spent very little time in England (he lived in his Duchy of Aquitaine, in the southwest of France), preferring to use his kingdom as a source of revenue to support his armies, he was seen as a pious hero by his subjects. He remains one of the very few Kings of England remembered by his epithet, not number, and is an enduring, iconic figure in England. 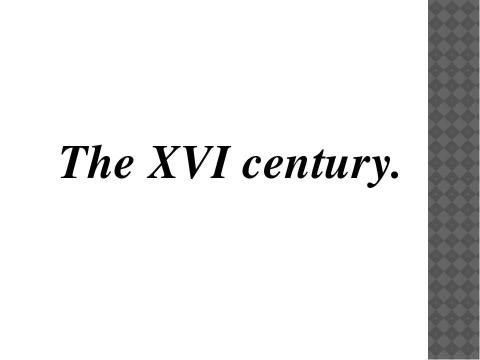 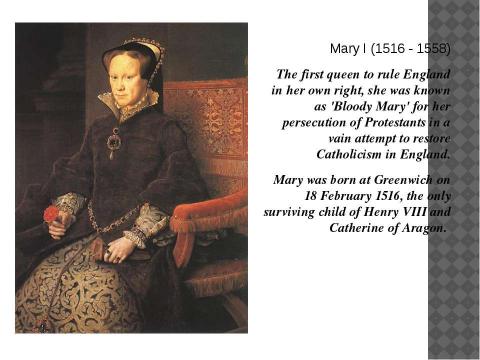 Текст слайда: Mary I (1516 – 1558) The first queen to rule England in her own right, she was known as ‘Bloody Mary’ for her $persecution of Protestants in a vain attempt to restore Catholicism in England. Mary was born at Greenwich on 18 February 1516, the only surviving child of Henr$y VIII and Catherine of Aragon. 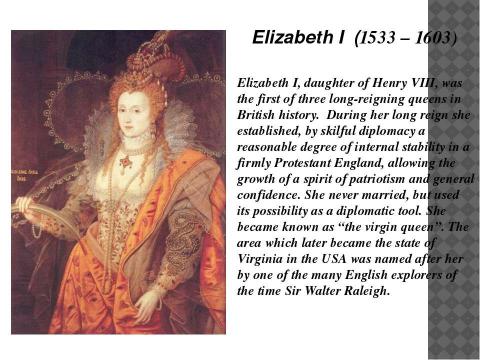 Текст слайда: Elizabeth I, daughter of Henry VIII, was the first of three long-reigning queens in British history. During her long reign she established, by skilful diplomacy a reasonable degree of internal stability in a firmly Protestant England, allowing the growth of a spirit of patriotism and gene$ral confidence. She never married, but used its possibility as a diplomatic tool. She became known as “the virgin queen”. The area which later became the state of Virginia in the USA was named after her by one of the many English explorers of the time Sir Walter Raleigh. Elizabeth I (1533 – 1603) 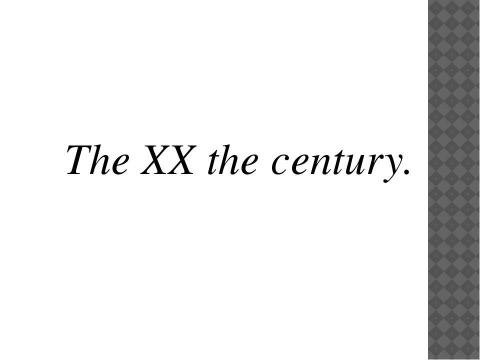 Текст слайда: The XX the century. 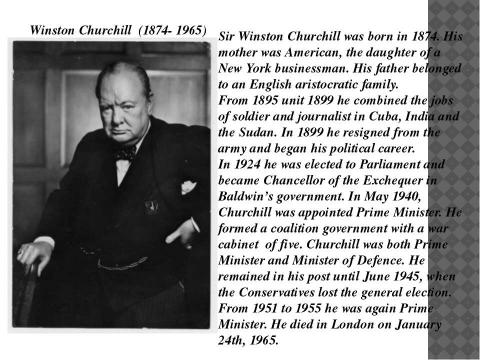 $Текст слайда: Sir Winston Churchill was born in 1874. His mother was American, the daughter of a New York businessman. His father belonged to an English aristocratic family. From 1895 unit 1899 he combined the jobs of soldier and journalist in Cuba, India and the Sudan. In 1899 he resigned from the army and began his political career. In 1924 he was elected to Parliament and became Chancellor of the Exchequer in Baldwin’s government. In May 1940, Churchill was appointed Prime Minister. He formed a coalition government with a war cabinet of five. Churchill was both Prime Minister and Minister of Defence. He remained in his post until June 1945, when the Conservatives lost the general election. From 1951 to 1955 he was again Prime Minister. He died in London on January 24th, 1965. Winston Churchill (1874- 1965) 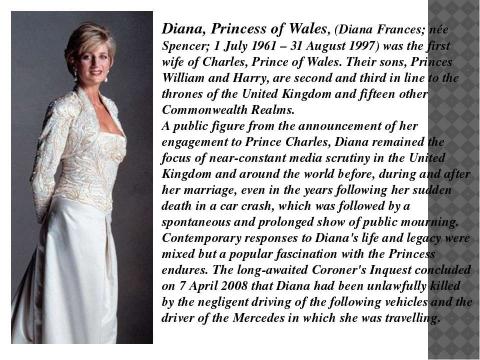 Текст слайда: Diana, Princess of Wales, (Diana Frances; née Spencer; 1 July 1961 – 31 August 1997) was the first wife of Charles, Prince of Wales. Their sons, Princes William and Harry, are second and third in line to the thrones of the United Kingdom and fifteen other Commonwealth Realms. A public figure from the announcement of her engagement to Prince Cha$rles, Diana remained the focus of near-constant media scrutiny in the United Kingdom and around the world before, during and after her marriage, even in the years following her sudden death in a car crash, which was followed by a spontaneous and prolonged show of public mourning. Contemporary responses to Diana’s life and legacy were mixed but a popular fascination with the Princess endures. The long-awaited Coroner’s Inquest concluded on 7 April 2008 that Diana had been unlawfully killed by the negligent driving of the following vehicles and the driver of the Mercedes in which she was travelling. 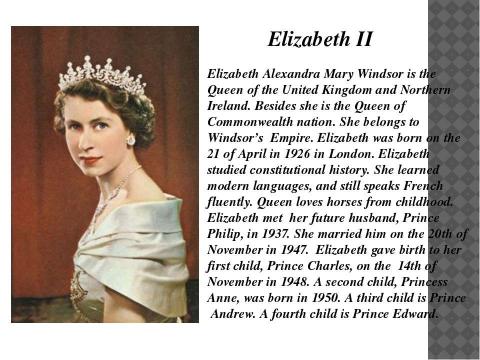 Текст слайда: Elizabeth Alexandra Mary Windsor is the Queen of the United Kingdom and Northern Ireland. Besides she is the Queen of Commonwealth nation. She belongs to Windsor’s Empire. Elizabeth was born on the 21 of April in 1926 in London. Elizabeth studied constitutional history. Sh$e learned modern languages, and still speaks French fluently. Queen loves horses from childhood. Elizabeth met her future husband, Prince Philip, in 1937. She married him on the 20th of November in 1947. Elizabeth gave birth to her first child, Prince Charle$s, on the 14th of November in 1948. A second child, Princess Anne, was born in 1950. A third child is Prince Andrew. A fourth child is Prince Edward. Elizabeth II 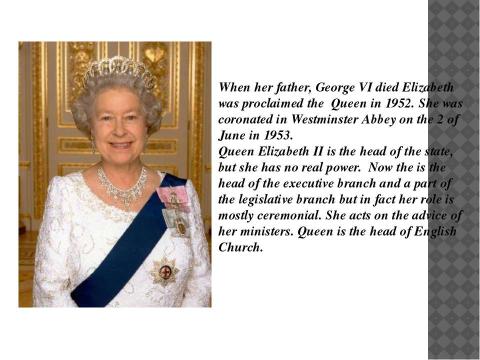 Текст слайда: When her father, George VI died Elizabeth was proclaimed the Queen in 1952. She was coronated in Westminster Abbey on the 2 of June in 1953. Queen Elizabeth II is the head of the state, but she has no real power. Now the is the head of the executive branch and a part of the $legislative branch but in fact her role is mostly ceremonial. She acts on the advice of her ministers. Queen is the head of English Church. 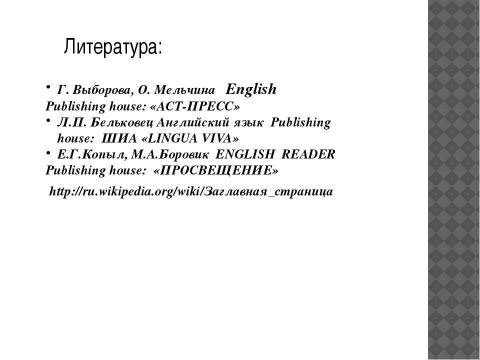 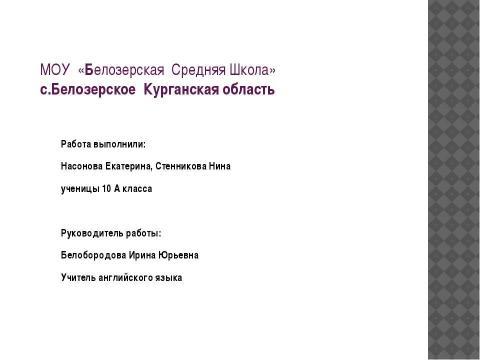