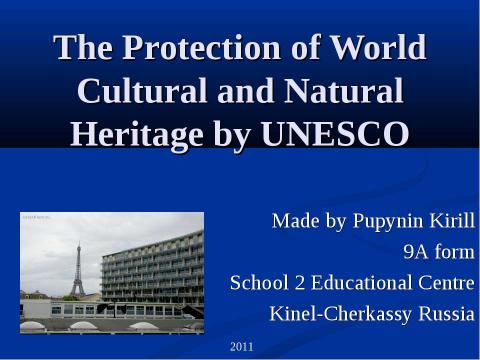 Текст слайда: The Protection of World Cultural and Natural Heritage by UNESCO Made by Pupynin Kirill 9A form School 2 Educational Centre Kinel-Cherkassy Russia 2011 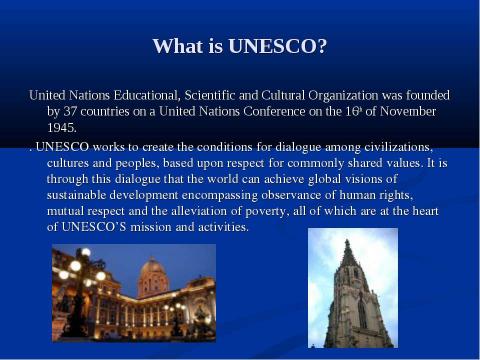 Текст$ слайда: What is UNESCO? United Nations Educational, Scientific and Cultural Organization was founded by 37 countries on a United Nations Conference on the 16th of November 1945. . UNESCO works to create the conditions for dialogue among civilizations, cultures and peoples, based upon respect for commonly shared values. It is through this dialogue that the world can achieve global visions of sustainable development encompassing observance of human rights, mutual respect and the alleviation of poverty, all of which are at the heart of UNESCO’S mission and activities. 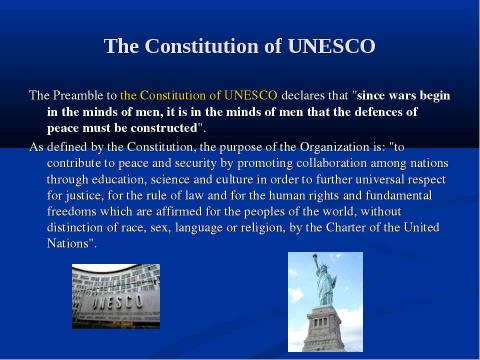 Текст слайда: Th$e Constitution of UNESCO The Preamble to the Constitution of UNESCO declares that “since wars begin in the minds of men, it is in the minds of men that the defences of peace must be$ constructed”. As defined by the Constitution, the purpose of the Organization is: “to contribute to peace and security by promoting collaboration among nations through education, science and culture in order to further universal respect for justice, for the rule of law and for the human rights and fundamental freedoms which are affirmed for the peoples of the world, without distinction of race, sex, language or religion, by the Charter of the United Nations”. 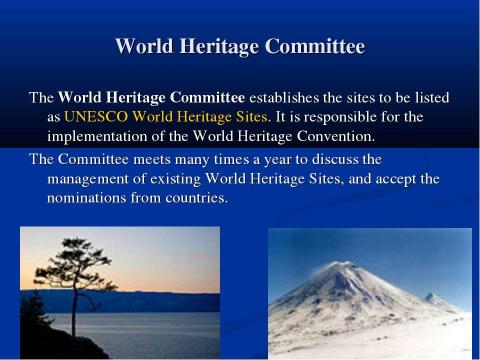 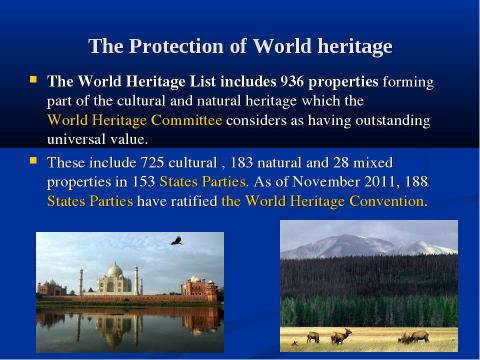 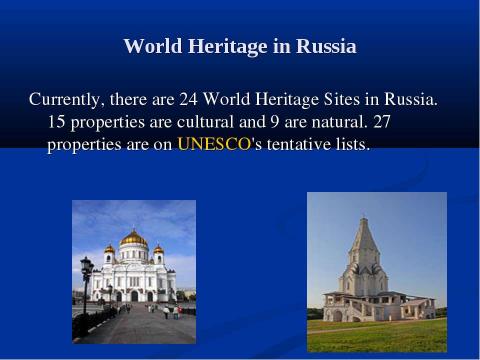 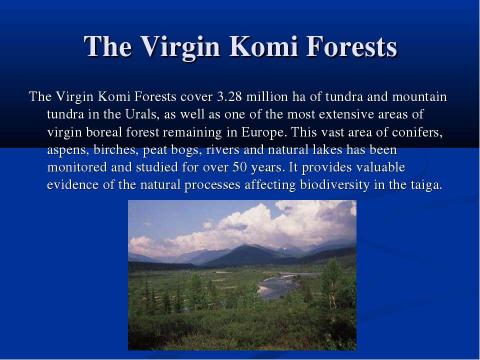 Текст слайда: The Virgin Komi Forests The Virgin Komi Forests cover 3.28 million ha of tundra and mountain tundra in the Urals, as well as one of the most extensive areas of virgin boreal forest remaining in Europe. This vast area o$f conifers, aspens, birches, peat bogs, rivers and natural lakes has been monitored and studied for over 50 years. It provides valuable evidence of the natural processes affecting biodiversity in the taiga. 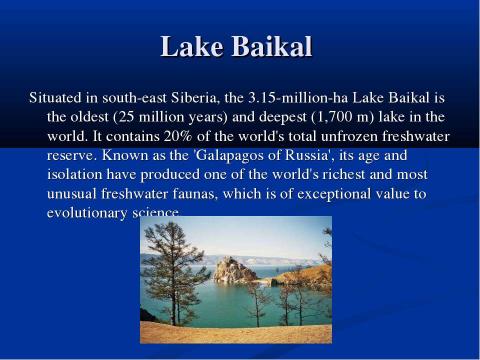 Текст слайда: Lake Baikal Situated in south-east Siberia, the 3.15-million-ha Lake Baikal is the oldest (25 million years) and deepest (1,700 m) lake in the world. It contains 20% of the world’s total unfrozen freshwater reserve. Known $as the ‘Galapagos of Russia’, its age and isolation have produced one of the world’s richest and most unusual freshwater faunas, which is of exceptional value to evolutionary science. 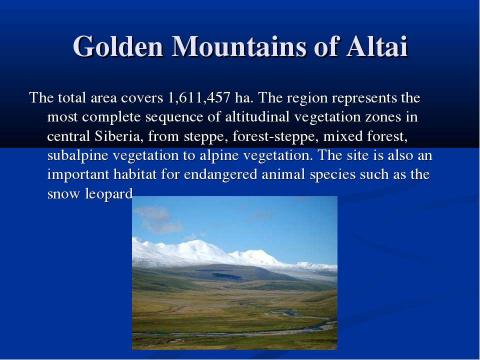 Текст слайда: Golden Mountains of Altai The total area covers 1,611,457 ha. The region represents the most complete sequence of altitudinal vegetation zones in central Siberia, from steppe, forest-steppe, mixed forest, subalpine vegetation to alpine vegetation. The site is also an important habitat for enda$ngered animal species such as the snow leopard.

Текст слайда: Architectural Ensemble of the Trinity Sergius Lavra This is a fine example of a working Orthodox monastery, with military features that are typical of the 15th to the 18th century, the period during which it developed. The main church of the Lavra, the Cathedral of the Assumption (echoing the Kremlin Cathedral of the same name), contains the tomb of Boris Godunov. Among the treasures of the La$vra is the famous icon, The Trinity, by Andrei Rublev. 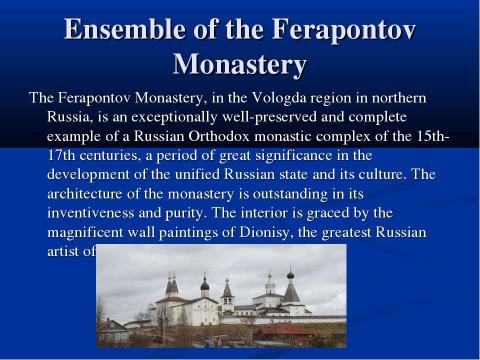 Текст слайда: Ensemble of the Ferapontov Monastery The Ferapontov Monastery, in the Vologda region in northern Russia, is an exceptionally well-preserved and complete example of a Russian Orthodox monastic complex of the 15th-17th centuries, a period of great significance in the development of the unified Russian state and its culture. The architecture of the monastery is outstanding in its inventiveness and purity. Th$e interior is graced by the magnificent wall paintings of Dionisy, the greatest Russian artist of the end of the 15th century. 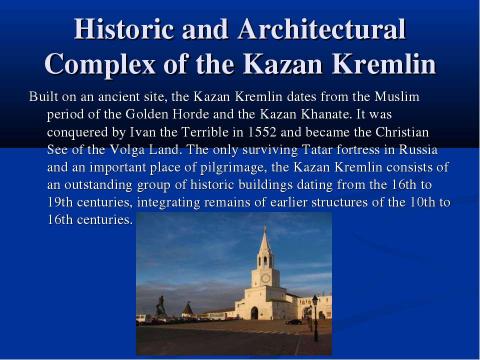 Текст слайда: Historic and Architectural Complex of the Kazan Kremlin Built on an ancient site, the Kazan Kremlin dates from the Muslim period of the Golden Horde and the Kazan Khanate. It was conquered by Ivan the Terrible in 1552 and be$came the Christian See of the Volga Land. The only surviving Tatar fortress in Russia and an important place of pilgrimage, the Kaz$an Kremlin consists of an outstanding group of historic buildings dating from the 16th to 19th centuries, integrating remains of earlier structures of the 10th to 16th centuries. 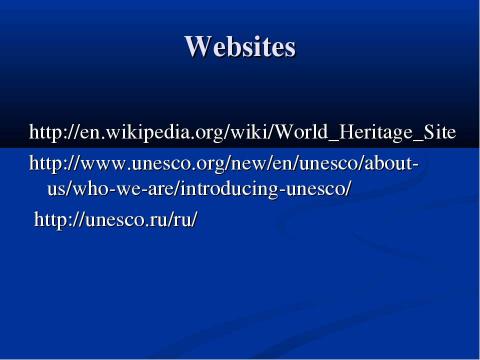 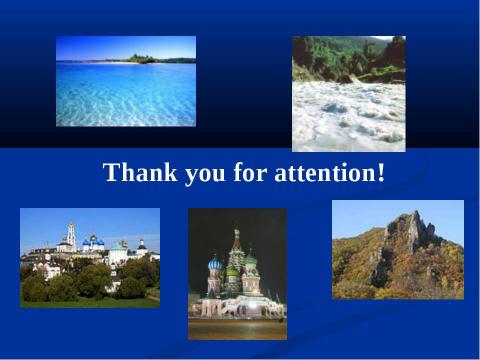 Текст слайда: Thank you for attention!